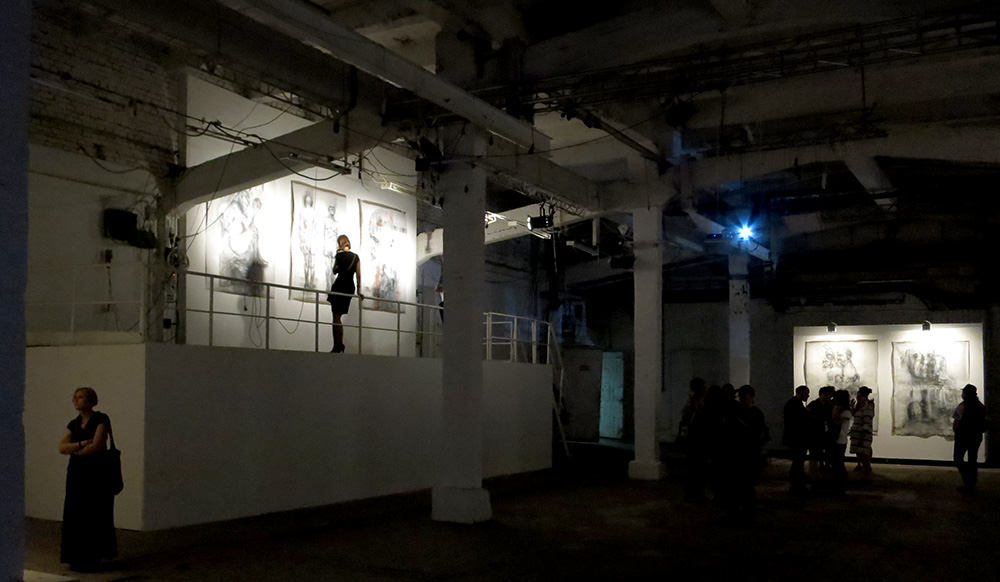 In the evening of 17 July, the day of finissage of “Люди/People” exhibition, we took a met with Katya-Anna to inquire her about our “Fabrika’s studios”, organization and exhibition support quality, completeness of her ideas realization on the CCI “Fabrika” site. Then we turned immediately to discuss her project, some new questions appeared, and the “business talk” suddenly became deeply soulful and personal. So we decided to publish a short version of the interview.

The conversation was held by: Asya Fillipova, CCI “Fabrika” director, and Nadezhda Lyalina, a freelance correspondent for CCI “Fabrika”.

Asya Fillipova: How did the idea about “Люди/People” exhibition came about and developed?

Anna Taguti: It took me about five years to work on the project. the result was a series of canvases, two pieces of video-art and an object of plaster casts. In many ways the exhibition is addressed to my father. It my father who was the starting point for reflections and feelings. You will see his hands, his face, his full-length images on thee pictures.

Now he lives through a stage of a Coram Deo before leaving to the Otherside, and I feel it most keenly. He is an artist himself, and he is open, he has no fear before death. He is hard to speak to now, but we discussed the theme earlier, and he expressed no fear. So do I, because I think there is no death. So my exhibition in many ways is about this question – there is no death, there is a place we will sometime meet. But losing your loved ones is, of course, hurts.

Asya Fillipova: Why do you address the topic of leaving and aging?

Anna Taguti: the aged people are very interesting themselves, as Grigory Pomerantz says: “The most beautiful of the person is of very slow accumulating, and if you manage to accumulate it at least by your old age, it rewards all your losses”.

I try to catch the essence of the process of withering and aging. Such a work lasts for many summers, winters, springs, autumns and sunsets. a person may lose a lot physically, but, as his body changes, his face may get a special significance, intelligence. While we are young, the body is easily managed, we’re full of power. Then one day everything suddenly leaves, a man can’t raise his hand, he can’t sit or lay down, he physically turns into a child. One of my pictures depicts my daddy sleeping in the embryo pose, on the background lungs and hart are drawn, which resemble flowers or a butterfly. This all is a reference to a thought about endless life.

Anna Taguti: Quite so, a portrait form is much significant for me. For the face is where all the personal life as well as all the person has done is reflected. the point is shown in Oscar Wilde’s “The Picture of Dorian Gray”. Dorian Gray was given such a happy gift: his true face and his portrait changed places. Non of us has such a magic picture at hand, which would take all the inevitable changes happened in our lives. I once knew a girl of a bright beauty and made a portrait of her. Five years passed and I see how the life of greedy consumption affected her face. Even now you may call her beautiful, but the facial features became sharp and harsh, one may feel something important is gone. the spirituality once proper to her has gone. Here I once again refer to Pomerantz: “The most beautiful and the most principal can’t be caught. This why it doesn’t matter the years more and more reduce the possibility of grasping, appropriating, tasting”.

Nadezhda Lyalina: You use a very interesting technique to work with the images. Please, tell us more about it.

Anna Taguti: I use palimpsest – both as technical method and as an image of multi-level life: you now watching something where the past is shone through and where the future is reflected on.

The base is the canvas, which background may be heterogeneous, intuitively selected. For example, it seems to me that here direct graphic lines – a radio circuit is needed, and here – an ornament, something decorative, as for tattoos or graffiti, in this case I use silk-screen printing. And I start do draw on the top of such a texture. the drawing itself turns out to be too realistic, so I improve it more and more – and finally I reach a deadlock. Then I paint it all over with the white paint. Something is emerging through this layer. And this “something” I start to pull out, drawing it anew, but now I don’t outline the old one, but I draw lines a little near, creating a new optics. I never know what I will reach in the end – I fight the material every time.

Asya Fillipova: Your paintings resemble Renaissance studies – why have you turned to this tradition?

Anna Taguti: Of course, there was a time when I carefully looked through the albums of Michelangelo, Leonardo and other great artists. When working on the project I recalled how I liked the composition of these studies: a figure and then suddenly an enlarged fragment of the body near it, a drawn hand, drapery or something else. It appears that such a fragmentary vision is close to our time, when something is snatched and elaborated in detail as with a camera zoom, and something is unclear and only sketched, some parts seem to be accidentally connected, and others are scattered.

For Renaissance artists these were auxiliary sketches for large paintings. But I wanted to use this method – such incompleteness, even the chaos I like more than thoroughly worked out pictures corrected to a dot. In my works I left all the vertical-horizontal auxiliary lines, the initial search for the composition. I could remove them, nothing would be easier to erase them or cover them up. But, in my opinion, they add extra sharpness to the drawing. And the canvases I specifically do not pull on the stretchers, I like them hanging like ragged skins – such uneven, “alive”.

Nadezhda Lyalina: In your picture people seem to intertwine, merging into each other.

Anna Taguti: Once I had a dream: a circle, a tunnel with many people in it, and they all shone through each other – so I drew one of my works. Here we return to palimpsest theme. In my point of view the world is a single stream of life, energy, feelings and emotions. That is why people in my paintings seem to interfuse, flow into each other. One of my works – “Unreal Landscape” – is visually stood out from the general series, it shows the perspective of the rail track. But I also enter human silhouettes in this landscape. Both birth and death are synchronous in this picture: we all walk above someone’s tombs and burials. Such things are quite spontaneous and hard to be described. And, although I rely on specific ideas and themes, in the process of work something else begins to appear, some purely visual inexplicable images arise, and I exteriorize them.

Nadezhda Lyalina: Who served as model for your portraits?

Anna Taguti: Now almost no one is posing. My father and one girl were the only ones I painted from nature. the rest are from photos or memory. These were my friends, neighbours and acquaintances. Everyone wants to see themselves beautiful, and I do not paint complimentary, I catch some expression, something unearthly, transform it. My neighbor – she’s 74 – was very indignant that she turned out “like a man”, she asked me to retouch it with some coiffure . (Laughs.) I think I’m drawing a man in the moment when he’s beautiful. We all are.

Asya Fillipova: Please tell us about your plaster casts work.

Anna Taguti: My dad is very sick, and the idea of the panel arose when I was making up a daily diet of medicines. I recognized our days, months, even years are made up with taking these pills. And when I presented them in the form of panels, a calendar turned out. From a distance it looks like Sumerian clay tablets, like cuneiform writings, but coming closer, you see that these are blisters from different tablets, small and large. a very sad situation, when your life develops not from some interesting events, exciting meetings, but from a certain set of medicines.

Nadezhda Lyalina: Two video-art works were presented at your exhibition – how do they relate to the rest?

Anna Taguti: These are two windows, and they echo each other. One window is filled with past life events – it’s dedicated to my father. the other is directed to another space, it is dedicated to our friend who has left forever, and this video was made by the young director Anna Shapiro. She shot the view from the window all night until morning. the resulting material, she then mounted with other visual images, quoting Tarkovsky. With this video we wanted to show that there is no death.

Nadezhda Lyalina: Why did you use a real window frame for another video installation?

Anna Taguti: I called this installation “History of a Window”. This is the window from my father’s studio – I literally took it from there, took out of the opening. My dad, looking through this window all his life, saw the same landscape, against which everything happened: he went to war, then returned, daughters were born, then grandchildren, I became an artist, the era changed. Now I look through this window just like he sometime did. I realized that in these two leaves, as in the book, the pages of our life flashed through. An idea came to me: a book-window. Over the course of five years, I took pictures of how the weather changes in the same landscape.

The graphic designer Georgy Dralkin helped me create the video: he technically embodied and developed my ideas, figured out how to make a projection on the window, so that it, while remaining transparent, would clearly broadcast the video. In the sound series, we used various noises: scraps of significant news on the radio, the barking of a dog, the sound of a spoon stirring sugar in endless tea, the cries of boys playing football, and many others – the also create such a “sound” palimpsest. a short part of the musical phrase was taken from my favorite TV series “Nikolai Vavilov”, music for which was written by Vladimir Martynov. the whole sound sequence is a metaphor for “noise of time”.

And here on the window panes, against the background of the same landscape, a series of images follows: the Order of the Red Star, the big inevitable letters of the CPSU, the personification of the Soviet system, father’s sketches for his paintings, his false jaw, his notebook, from which the phones of friends are gradually crossed out, already gone to another world. Here he is reflected in the window. the window is static, the landscape behind it is the same, only the seasons change. And against this background is the whole life, with its big and small events. It flips through, falls out of hands, leaves the body. I wanted to understand how this happens – how the living transforms into an inanimate, in memory.

Asya Fillipova: What are your plans for the future?