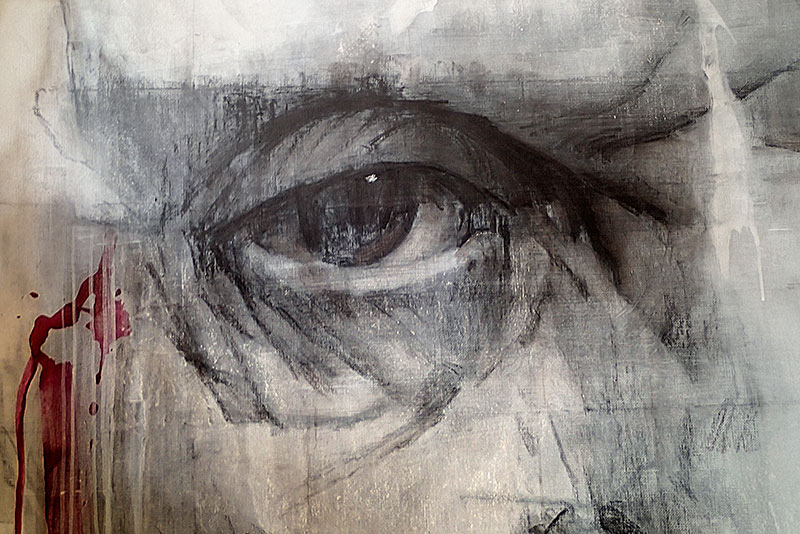 As the human race inevitably seeks to reach its fall (and it appears to me it will manage sometime), imaging the most important component of the universe, the human itself, turns out to be increasingly dramatic. Formal variability of such representation is infinite, and it sounds oddly for the finite universe. But the art of imaging elaborately is the most everlasting of all (as the ancient Greeks knew – ars longa, vita brevis est). the metaphysics of such a definition will be necessary opposing to material essence of the nature, its forms and manifestations.

A portrait, born with the strokes of charcoal on the surface of the rock stone, lives on in the sand, in the tree depth, finds its biological essence in the blood clots and dang. A portrait is manifested in all three states of aggregation, may serve as a cryptogram of landscape or anthropomorphous still-life. A portrait is the absolute mastermind of humans, who habitually play the leading role in the universe.

The artist Katya Anna Taguti is one of the “portrait priests”. It’s them who are expected for revelations and sermons. the world of her characters is the pro-prustean bed for objects, phenomena and gnosis. Descriptive language here faces the difficulties in translation: a contemporary artist, like the artists of the past generations, tends to be reflective, he hardly avoids catching the straw of stasis and self-repeating. Perhaps here may be trapped those who expect the artist to be recognizable, or instinctively seek for typologically common features. That’s the whole point; in Japanese Taguti (taguchi) has a significant meaning “a hole in the field”. There you can hide from a danger or you can face it, wait till disaster is over or become its victim. 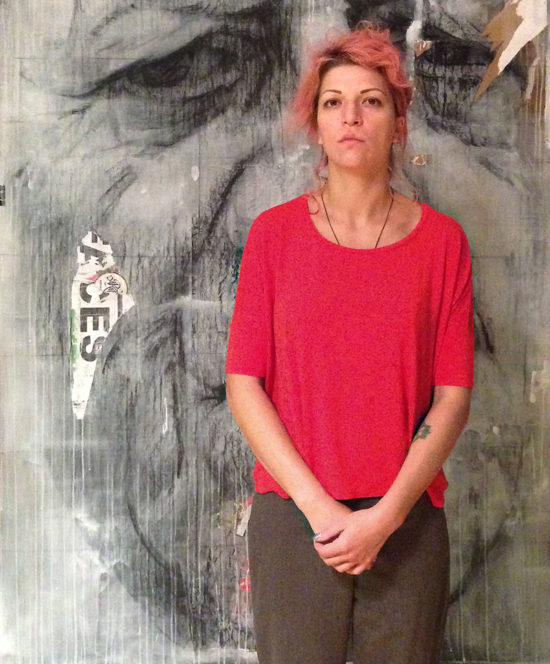 Taguti’s “People/Large Portrait” project is the brand new way to express her inner treasury of thoughts, speculations and observations. This experience it seems took away all the potency for a following expression. But you can not tolerate the fact that such internal work leaves the artist almost powerless. So Taguti does not – she both questions and even researches such a condition, each time finding new strength to revive herself as a researcher and an artist.

Taguti’s need to articulate her subject is formulated physically, even tactilely. This time her “people” are not wholly referential to the past, as we’ve seen it in her recent projects (“Bedsheet”, 2015, “The Second Soul”, 2005). They are not stiff stigmata of consciousness. They are more and more alike some monuments to the future, Grand-style projects resembling architectural utopia of Ivan Nikolaeff or Boris Iofan.

In her “Large Portrait” you can see the genre becoming monumental, and nevertheless, we see in “Portrait” even not so much traits of Imperial Roman monumental, how many ancient Greek attraction to the main issues dawn. Here you find both Homeric epos and Aeschylean tragedy, deep contemplations on fatum, relations between God and human, roots of painful feelings, sufferings that there is no way to “cure” this pain.

The whole gallery of this portrait cycle is actually one common portrait repeated like Goldberg Variations. There the main theme is heard and its “branching pathways”; you can hear the choir, but the voices are recorded by a unique performer and then mixed, as it does a sound director when mastering. We shouldn’t be confused by a naming variety for each item of the cycle – the Character remains the same, the creator, who’s taken the guise of his characters. It’s her and nobody else reveals the face of a person in the Portrait, and the face is not a mask, while background and scenery are not the folding screen. “Every portrait that is painted with feeling is a portrait of the artist, not of sitter” (Oscar Wilde).

The gift of impersonation, ability to feel with the skin and the entire nature, is the sign of the highest standard, given to a very few. Taguti, no matter how, whether she’s actress in Kabuki or Sophoclean theatre, is not only empathic performer of all the roles, but a medium of the staged action. Peering her “People” images, we imbue with a perpetual sensation of living the life of the Other. But the point is that “mine” and “other” often switch their places, provoking our naïve mind to be mistaken. Perhaps that is why Taguti’s personal experience as well as her characters’ experience, may be easily projected onto lives and fates of the other people, thus becoming universal channel of the artistic perception.

For instance “Last Father’s Portrait” (2015) – here the very name contains dramatic effect of the loss, as if we reached the point of no return to the previous condition when “Portrait” is not yet “Last”. Now we know – no “next” portrait will be done. I recognized “Father” as my father’s portrait as well. I don’t mean the formal resemblance, when an artwork is judged by the “similar-not similar” principle. Here you face a sudden flashback, and then the flashing images, making us believe in sensual memory, the flashing images of father’s hands, his frowning glances, meditative tension of the wrinkles on his forehead. Thus the “Last Portrait”, filled with deepest intimacy, turns into memory cluster of the days of carefree joy for a son or a daughter.

“Vasili Aksyonov’s Ear” (2017) is also a Portrait despite its deliberate fragmentarity. I will never forget the day Vasili Pavlovich and Katya visited my gallery. I can’t say what was the most impressive about him for me – his lively eyes, brilliant intellect, hilarious tales – surely that was not his ear. Dare I peer our renowned writer more detailed, his ear was the last thing I would think of. But today Katya’s version seems to be extremely convincing, it’s her who really knows – the ear is Aksyonov’s. Here I recall Tsevetaeva’s verses:

My ear attends to you
As a mother hears in her sleep.

Another writer introduced by Taguti is an American brilliant master of short-stories, still unknown for Russian reader. James Salter is one of the writers, who established US prosaic style at the turn of 50’s and 60’s. An outstanding and heroic personality, West Point graduate, a fighter pilot in Korean war, he was also renowned by his screenplays for Hollywood, one of them has won the Golden Lion. It is curious that Salter has written a novel titled “Solo Faces”, and perhaps it inspired Taguti to her peering into faces. However in “Salter’s Portrait” we meet the sudden turn – it seems not the spectator watches the face of a brave person anymore, but vice versa the face watching us attentively and inquiring, ruining the trivial view at a picture as an object for cultural use. “Salter” was painted soon after the writer’s exit in 2015; through the wrinkles on his face appear the remains of russian promotional stickers, announcing 500% discount in the wholesale stores.Oskar Kokoschka is one of the most favorite artists for Taguti. Here he “sits” concentrated and anxious. His mouth’ angles slightly deformed, the eyebrows are linked at the nose bridge. His face on the wall is washed by the rain, the streaks of coal and white paint are marked. “Desecrated” by Nature Kokoschka still keeps his character. Taguti can’t hide her worship to the master. I’m sure, such a graffiti would perfectly fit the brutal concrete of the Berlin wall in that roaring days of 1989 – 1990, when it was not yet been taken to pieces for souvenirs.Striking by its impact “Old Polish Woman Portrait” (2015) made me recall Pavel Pavlikovsky’s film “Ida”, shot a couple years ago. the fibula of the film is a story of a Polish-Jewish girl, who was taken to a nunnery in the war years and thus avoided the tragic fate of her kindred killed by peasants, who feared the prosecution for sheltering the Jewish family. A linkage with the film plot, though unevident, helps me focusing on Taguti’s image of the old woman, young and careless too in the days, when trees were saplings and there was no war. Now the open pupil of her eye and topographic relief of her face tell us about love, treason and the years passed more than the words would do.

The language of Taguti’s painting (you can hardly define her works as graphic genre, though she widely uses graphic material) is cognate to the cinematic techniques: faces and heads, changing each other like in time-lapse cutting, enliven the spatial environment, impart action dynamics, even though the imagesd are generally static. Details are emphatically mobile, they change their coordinates when read in close range. Large canvases fascinate with deliberate brutality of the texture.

The artist left a kind of “tag” in one of her works (“Writer’s Portrait”) – a rubbed, poorly read inscription: “Sergei Eisenstein”. I think it’s not without reason: she has a painter contract with him, she widely uses Eisenstein’s alternation of close-ups (close… closer…), just like “Battleship Potemkin” was edited. If we return to Aksyonov’s ear – isn’t it a reference to Chris Kelvin from meditative “Solaris”? It’s his ear that was the container for thinking ocean.

The “Self-Portrait” (2015) of the artist is also extraordinarily represented as the soaring up monument. the faces are so directed that a very difficult conflict with the self-determination, searching for her place might be read. Traces of an architectural plan given in cut only strengthens the feeling of the fluctuation of choice, fragility of situation, here you cannot wait for unambiguous decision. the “Self-Portrait” reminded me the huge sculptural “Monolith” by Gustav Vigeland in Oslo, with their figures of naked ones, trying to escape their imminent death in the embraces.

Taguti carefully takes stock of her and our past, in her archaeology of memory, stratum after stratum, new meanings are found, variability of matter is captured. It’s like the householder clearing away the walls. Behind the countless layers of the wallpapers in different colors and design newspapers and posters are found. Their slogans revive not only the people once lived here, but their time, hopes and troubles also. Such a revival, like the opportunity for self-knowledge, is vitally necessary. Both for the artist, constructing the future, and for us spectators enchanted watching the course of her thought.

Ildar Galeev – an art critic, curator, publisher, collector and gallery owner, an expert on Russian art of the first half of the 20th century, author of about 40 publications on the work of Russian artists and photographers. In 2017 he received the award the Art Newspaper Russia in the nomination “The Book of the Year” for his publishing activities, or rather for a two-volume “Kuzma Petrov-Vodkin and his school (1920-1930s).”